I want to begin this piece with an important bit of housekeeping. Although what follows will contain criticisms of Steve Bruce and his antiquated, negative style of football, this is not an article for those wishing to pile on with more abuse. The reports this month of death threats to Bruce highlights the ugly side of a game that professes to be beautiful. As fans, we can, and must, do better. There is no place for this sort of abuse, which is sadly commonplace in the social media age, amplified on an increasingly furious Twitter.

This article is designed to highlight the contrast between Steve Bruce and Dean Smith, two men who are footballing polar opposites and to comment on a strange, sometimes painful period for Aston Villa Football Club with Bruce at the helm and its difference to the present day.

A play-off final and a cabbage

It started with bemusement and ended with a cabbage. In between there was a play-off final appearance, although an insipid, negative, risk-averse display saw Villa lose 1-0 to Fulham, in truth, at no point did Bruce’s team look likely to win. That defeat would of course pave the way for the financial revelations to be laid bare as Dr Tony Xia’s spell as owner unravelled in a disturbing fashion. The Tony Xia fiasco is a story for another day, but this seems a good point to highlight the positives of Bruce’s tenure, as, despite claims to the contrary, there were several.

Bruce was appointed with Villa languishing in the bottom half of the Championship, without a victory in eight games under his predecessor, Roberto Di Matteo. From this low point, Bruce steadied the ship, a more impressive feat with every new Tony Xia anecdote revealed, took Villa to the verge of top-flight return and made a series of good signings, most notably the coup of Premier League legend John Terry and current fan favourite John McGinn. It is also worth mentioning some exceptional personal circumstances dealt with by Bruce in the months preceding that play-off final defeat, he lost both of his parents.

Speaking from personal experience losing a parent is something of shellshock regardless of their age or prior health, a steadfast and constant in your life is gone, to lose two in quick succession must be devastating and hugely emotionally damaging. So, to have conducted himself with such dignity and professionalism whilst still taking the team to the brink of the Premier League is a commendable act for which he deserves our unreserved respect.

Now for the negatives. In comparison to Dean Smith and the enlightened football we have been watching in recent times Steve Bruce appears to be from a bygone era, and in many ways he is. There is often a tendency to group Steve Bruce, Sam Allardyce and David Moyes together, hangovers from football’s past. I would argue however that David Moyes is capable of adapting, building sides with solidity and attacking prowess, as evidenced by his harnessing of the threat of Michail Antonio and Tomáš Souček at West Ham. In the case of Sam Allardyce, he may be a managerial mercenary with a crude style of play, but he can produce sides with far more bite than any of Bruce’s listless offerings. Allardyce was in fact viewed as a progressive in terms of his analytical insight utilised to great effect at Bolton, there is not the merest hint of a progressive view around Steve Bruce. 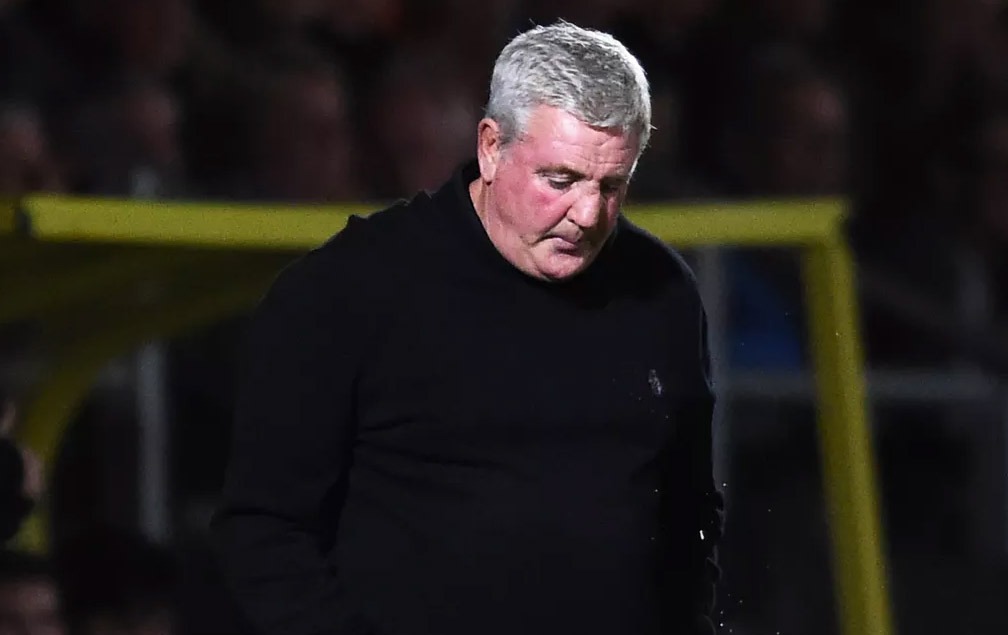 Bruce’s teams particularly some of his current Newcastle offerings appear utterly defeated from the outset, conceding possession, hoping to stay in games without offering any form of ambition and maybe, just maybe scoring from a set-piece. The statistics do not make for pleasant reading for fans of Bruce teams in terms of their attacking output. His Newcastle team are currently 17th in the table, 16th for total shots, 18th for shots on target, 16th for goals scored and depressing in its predictability is their placing of 3rd for long passes.

To illustrate the chasm between Dean Smith and Steve Bruce, the equivalent placings for Villa are 8th in the table, 6th for shots, 6th for shots on targets, 8th for goals and 9th for long passes. It is, to put it bluntly, night and day.

His Villa win percentage of 45% is one of the better returns of a career which has an overall victory rate of 38%. The issue for Bruce was and is that when things take a turn for the worse as they did from the play-off final onwards, his style of play leaves him more exposed than a manager with a positive approach. When Bruce’s sides perform badly the attacking threat is non-existent, any positive aspiration is equally absent, and it is draining to watch as Villa and Newcastle fans can attest to.

I canvassed the opinions of several Newcastle United and Aston Villa supporters for the purposes of this article. As you can imagine the responses were something of a mixed bag but heavily critical in terms of style of play and the mood around clubs as a result.

“Most Newcastle fans never wanted him in the first place. It didn’t help his case that we went from a Champions League-winning manager to Bruce, but it was very underwhelming.

It also stunk of Ashley getting a ‘yes’ man. Time goes by and we do manage to get points on the board, but the style of football was and is awful. Not entertaining in the slightest. We seem to be defensive no matter the opposition!” @LeazesEnd1892 – Newcastle United fan

“Steve Bruce was vital in our resurgence; people are very quick to forget the absolute nightmare he took over. The squad was bloated with huge wages and the team in the doldrums and looking more likely to get relegated again than promoted. He took us to Wembley and yes we bottled the final, but he steadied the ship.” @stefaulkner – Aston Villa fan

“The only good thing at Newcastle under Bruce is the fact Ashley has given him money to spend. Everything else is just awful. Awful football, awful selection, awful subs, and awful tactics. We have no hope” @AndrewSuperDad – Newcastle United fan

There is something profoundly sad about watching Bruce’s teams, even more so these days. It all has a hint of self-harm about it, Bruce takes on jobs where he is unpopular from the outset and then compounds it with primitive football. Bruce entered Villa Park knowing the uphill struggle a former Birmingham City manager would face, let alone one who once celebrated a crushing last-minute derby equaliser as opposition boss with such fervour.

At St James’ Park despite being a boyhood Magpie his tenure at Sunderland and the fact his predecessor is the much-revered, European Cup-winning Rafael Benitez means he has been unlikely to win a popularity contest from day one. Yet time after time Bruce puts himself through the wringer, often with maddening denials of the reality of the situation at hand.

Aston Villa now finds themselves in the enviable position of being managed by an attack-minded, forward-thinking manager who understands the club by virtue of his lifelong association with it. Bruce despite his allegiances just does not seem to get Newcastle at all.

Villa now look up the table, they have loftier ambitions than survival with European football an achievable aim this season, Newcastle United, on the other hand, seem to be hellbent on keeping that relegation battle very much alive by handing Fulham lifeline after lifeline.

Steve Bruce won no less than nine major honours during his time with Manchester United, an iconic defender who quite rightly demands a place in Premier League folklore, it is a sad reality that he is now more readily recognised as a managerial relic. Bruce is a football man whose agricultural style has had its day, there have been good times with the likes of our city neighbours and Hull, but they are nothing more than a distant memory now.

Looking back on the Bruce era is an odd experience, he was never going to be the right fit for a demanding Villa fanbase for a myriad of reasons. Reminiscing about the painful play-off defeat to Fulham you realise it is a result to be thankful for in many ways as it exposed Tony Xia and his handling of the club, led to the NSWE takeover and allowed us to move from Bruce to Smith. We should of course give Bruce our thanks and respect for steadying the ship during the most tumultuous of times for our club but be glad that both his and that era are consigned to the past.

Team news, stats and prediction ahead of Leeds vs Aston Villa in the Premier League on Saturday (kick-off 5.30pm). Team news Leeds midfielder Mateusz Klich is an injury doubt to face Aston Villa....