Aston Villa make a long awaited return to Villa Park in front of a full house as they entertain Newcastle United.

Both sides will be looking to kick start their seasons after opening day defeats to Watford and West Ham United respectively.

Saturday afternoon will see the return of former Villa manager Steve Bruce as he looks to improve upon the 12th place finish in last season’s campaign.

Just one place separated the Aston Villa and Newcastle United however there was a ten point gap as the Villans finished on 55 points to the Magpies 45.

Aston Villa finished 11th last season in regards to points gained at home with 7 wins, 4 draws and 8 defeats which gained them 25 points with a positive goal difference of +2.

Newcastle United finished 12th in terms of away points as they won 6, drew 4 and lost 9 on their travels to pick up 22 points with a negative goal difference of -9.

The Toon Army have had a quiet summer with the only incoming being in the form of Joe Willock who was previously on loan from Arsenal and he played a big part in their upturn in form last season.

Preseason saw them win three of their five fixtures against Doncaster Rovers, Burton Albion and Norwich City with a draw at Rotherham United and a solitary loss away to York City albeit with a much weakened side from the one expected on Saturday.

For Aston Villa, it presents itself as a fixture in which they will simply be pushing to win. The opening day defeat will have only pushed such ambition and they will want to reward the return Villa Park faithful with a positive result and performance.

The two clubs have had an odd form of ‘online rivalry’ over the last decade due to key fixtures between the two clubs being key in determining relegations.

However, both teams have huge fanbases and ownership issues have been in the headlines more than the football within this time period. Both sets of fans continue to look to return to consistent top half football but with the finances of football and the stranglehold of the ‘top six’ it is a much easier said than done task.

Last season saw Aston Villa win the home fixture 2-0 thanks to goals from Ollie Watkins and Bertrand Traore in the first half.

The return fixture resulted in a 1-1 draw with a late Ciaran Clark own goal putting Villa ahead before a 94th minute equaliser from Jamel Lascelles saw the points shared.

Aston Villa will once again have to face multiple absences with Ollie Watkins (knee) remaining out and Bertrand Traore (hamstring) has had a setback from his return. Morgan Sanson (knee) has not yet played competitively with Trezeguet (ACL) remaining a long term injury and Keinan Davis also still sidelined.

Douglas Luiz returns from his success at the Tokyo Olympics and will be in contention for a start.

Anwar El Ghazi or Jaden Philogene-Bidace who impressed during preseason will both contend to start on the wing in place of the absent Traore.

Other than these suspected absences, Bruce will be able to name a team relatively unchanged from last week’s 4-2 defeat to West Ham United. 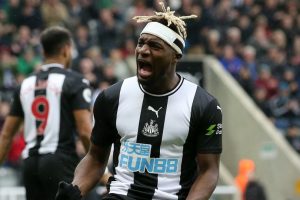 Primarily an attacking midfielder that can play across the park but also utilised as a forward, Allan Saint-Maximin has provided a much needed flair to Newcastle United resulting in him quickly becoming a fans favourite.

His primary strengths are his dribbling and key passes in the attacking third with weaker areas being identified as holding on to the ball too long and his defensive contribution.

The Frenchman played only 25 league games last season due to injuries and had 12 shots on target from 30 attempts at goal, scoring 3 times.

Saint-Maximin averaged 17 passes per match with a completion rate of 83% and also provided 4 assists.

His quick feet, skill and creativity all contribute to making him a dangerous opponent and he has been linked with numerous teams of late.

AVILLAFAN MATCH PREDICTION
With both teams starting with defeats, both sides will be likely to push for the win and with seven goals conceded between them last week, there are surely going to be goals.

With Villa Park sold out and the likes of Leon Bailey and Danny Ings looking to get off to a strong start in front of the claret and blue faithful, we have been positive and all went with a Villa win. (Early season optimism!)

Tip of the day
With both teams leaking goals last weekend and a Villa win the overwhelming prediction from the panel, Aston Villa with -1 goal handicap is available at around 9/4.

AVILLAFAN.COM is not an online gambling operator or website of any kind.

Any tips are made for entertainment purposes only and it is the responsibility of all visitors to this site to check current laws in their own area of residence before gambling online.

Our site is here to provide fan perspectives of news, events and stories regarding Aston Villa.

A weakened Aston Villa were knocked out of the League Cup by European Champions Chelsea after losing 4-3 on penalties at Stamford Bridge. Dean Smith made wholesale changes to his side with only two...