For every mesmeric, dazzling Jack Grealish run, exquisite Ross Barkley pass or Ollie Watkins goal, Aston Villa’s newly-found defensive nous away from home has been crucial to a brilliant start to the new top-flight campaign.

Amongst Villa’s eye-catching performers, right-back Matty Cash epitomises the guts and desire that Villa required to make a record-breaking start to the Premier League season, while Ezri Konsa and Emi Martinez have continued their respective form from where they left off in Project Restart.

Martínez made his first return to the Emirates after leaving the club with both well-wishes and bemusement from Gunners fans. He had little to deal with as Villa ran out 3-0 victors on his return to London – many Arsenal supporters and former players believed he earned the right to keep the gloves ahead of the new Premier League season.

In front of the Argentine, Konsa and Tyrone Mings are forming a formidable partnership which has so far set the tone for some excellent defensive displays. In away wins over Fulham, Leicester and now Arsenal, the two have stepped up to help earn some crucial points away from Villa Park this season.

Villa only took nine points from away fixtures last term before Project Restart kicked off in June, but after winning three of the five games so far this season on the road, Villa are making effective use of not only the absence of home fans but also some impressive individual defensive displays.

In Villa’s fourth win at the Emirates in 14 years, Matty Targett arguably played his best 90 minutes in a Villa shirt so far, offering support to Jack Grealish who was a constant tormentor for Hector Bellerin – a key member of an Arsenal side who only last week took three points away from Old Trafford.

Villa owners Nassef Sawiris and Wes Edens are starting to see a return on their £220 million investment into a Villa side who only won promotion back to the top-flight in 2019. The club are plotting their ascent to the top of the English football ladder with shrewd recruitment and player development crucial to an ambitious five-year plan.

While their tenures are still firmly in their infancy, Villa’s new-look recruitment team will be afforded time to mould the desirable culture Dean Smith and Christian Purslow are working around the clock to install.

Impressive results away at Leicester and Arsenal, not to mention the 7-2 demolition of Premier League champions Liverpool, has fast-tracked Villa’s progress this term, even if Smith’s side have only played seven games.

Improvements to the existing playing squad have also been crucial. Identifying a calibre of player willing to work and improve, play for the shirt and above all fit the club’s ethos is no easy task, but in the case of Ezri Konsa, Villa have a gem on their hands.

After a year at the club, Konsa’s development serves as proof that Bodymoor Heath can nurture a talent once labelled ‘the best young centre-back in the country’. Still only 22 years of age, Konsa already racked up 133 club appearances before joining Villa last year.

His three-year spell in the EFL with firstly Charlton, then Brentford opened the door for a lasting career at the top. By the time Konsa had turned 20, he’d already made more appearances than most professionals have in their entire careers – making over 100 under four different managers.

So jetting off to the United States after penning a long term deal with Villa alongside his new team-mates wouldn’t phase the young defender whose career has taken him from League One to Wembley cup finals in the space of two years.

Mature for his age, Konsa’s recent performances have only been supported by the quality of goalkeeper Martínez – who breathes confidence into a defence that shipped 67 goals last season – only Norwich City conceded more. 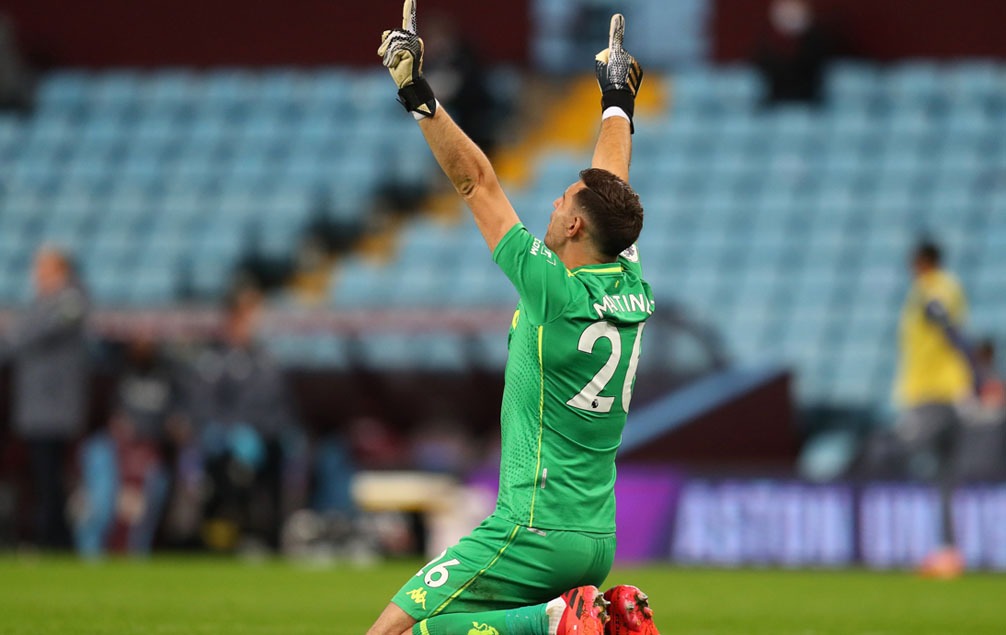 Martínez had been banking on his chance to make an impression at Arsenal for almost ten years, waiting in the wings to take the chance promised to him for a decade. Arsene Wenger used to tell Villa’s £20 million goalkeeper, “you’re the future of this club.”

Martínez’s overdue audition for the Arsenal number one jersey was a timely coincidence for the 6’2″ ‘keeper who’d used a full-size goal in his back garden to keep on his toes during the lockdown period.

It was more a psychological game than anything else for Martínez having spent the duration of his Arsenal career second or even third choice – but he wasn’t going to let this opportunity pass.

He took it with both hands, and not only would he hold onto the gloves, but he’d also be raising aloft the FA Cup and Community Shield come the end of the 2019-20 season after some sublime performances against Manchester City, Chelsea and Liverpool.

“I’ve been at Arsenal 10, 11 years fighting for my spot. When I won the FA Cup and the Community Shield, I spoke to my family and said ‘it’s time to have a new challenge’,” Martínez told arsenal.com.

“When Aston Villa gave me the opportunity to fight for the spot and play loads of Premier League games and that’s why I decided to come here.”

With no shortage of potential suitors, the lure of playing for Aston Villa, for many reasons persuaded Martínez to leave the Emirates after a decade without regular football.

For Martínez – a goalkeeper who acquitted himself very well during Project Restart and in recent loan moves in the Championship – a move to Villa, who only on the final day of last season secured Premier League safety may have seemed a backwards step.

“I’m in the best shape of my career and when I didn’t have the security of that game time, I wasn’t sure about staying,” Martinez told Sky Sports after leaving Arsenal.

“My goal is to play in Europe because I did not come here (Villa) thinking that we are going to settle for not getting relegated. My ambition is to reach the Europa League & that is my goal, my dream, that’s why I work, that’s why I do everything I do.

“I’m fighting to be Argentina’s number one, that’s my dream. Aston Villa is a massive club, I had no doubts over coming here. Everyone thinks it’s a step down going from Arsenal to Villa, but I actually think it’s a step up in my career.”

For every fingertip save, commanding catch or pin-point pass, Martínez’s attitude and mentality to prove the critics wrong will remain his outstanding quality in a story that has taken him from Mar Del Plata to Villa Park – he’s eager to make his next chapter with Villa a memorable one.

You’ll find those humble beginnings aren’t in short measure amongst a Villa squad hungry to improve at Bodymoor Heath and results at the start of the new campaign – barring loses to Leeds and Southampton – are evidence of it.

In his first four games to the new campaign that saw Villa pick up 12 points from 12, three clean sheets and a 7-2 win over Liverpool, Matty Cash has not only been a mainstay in Dean Smith’s side but also a stand out from his seemingly reserved full-back role. 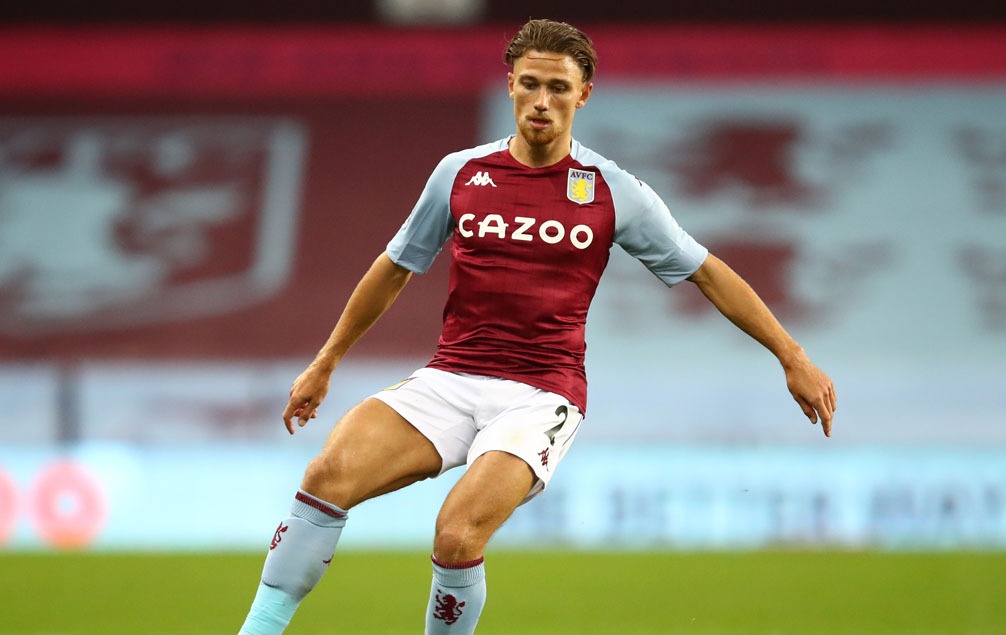 As Cash took to the pristine field at the Emirates to make his seventh start of the league season, he faced the daunting task of keeping current Premier League golden boot winner, Pierre-Emerick Aubameyang at bay.

For the first time, Aubameyang played 90 minutes in a Premier League home game without attempting a shot against Villa – indeed, Aubameyang was one of only three outfield players who didn’t record an attempt for Arsenal in the game, testament to Cash and Villa’s organised display.

Cash left Nottingham Forest in the summer with all the well-wishes of a player that’s stolen the hearts of a fanbase all too familiar with some of England’s finest players down the years.

The 23-year-old who had no shortage of offers from around the Premier League will move across the Midlands to Aston Villa in a deal worth up to £16 million. Dean Smith is keen to strengthen the squad that clinched Premier League survival on the final day of last season.

Villa were determined to land the services of Cash, who has already added versatility, plenty of quality and more importantly a desire to improve and learn under head-coach Smith. His enthusiasm, determination and versatility brands him the correct profile of player to succeed in the top-flight which seems even more likely given his ‘every manager’s dream’ tag.

Cash may not be a household name yet – unlike Kieran Trippier who Villa had been linked with before finally signing their man – but he fits Villa’s strategy of recruiting the players with the desired player profile which is nowadays more important than ever for Smith, who is keen to embrace a new culture at Bodymoor Heath.

Having been released by Wycombe as a youngster, Cash emerged from the FAB football academy in Bisham before signing a three-year deal at Nottingham Forest.

Cash is keen and willing to improve in order to not only play his part for Villa this season but improve them in ways not so obvious as first thought. John Terry has endeavoured to sharpen his defensive game while adapting to the pace and intensity for the Premier League will come with more game-time under his belt.

An enthusiastic individual on the training pitch also, Cash could’ve kicked up a fuss when former coach, Sabri Lamouchi – new to the Championship managing game – ordered him to step into the full-back role, away from his preferred role, one he’d been developing in for numerous years. Though his response was a breath of fresh air.

Taking on the responsibility for the team, flourishing in a position where he can still break the lines, attack and defend with versatility – eye-catching performances last season weren’t few and far between, in fact, quite the opposite.

His work-rate has rarely been beaten throughout 90 minutes during his Premier League showings this term. He epitomises the ‘modern full-back’ role with an appetite to influence the game from his deeper-lying position.

Rarely will you hear a bad word said about Cash, his temperament, attitude and focus is testament to his character, and his overall game is all the better for it. His athletic efficiencies are also evidently helping out Villa this season and certainly, they’ve helped him personally adapt to the top-flight.

Cash holds all the attributes to be a success, and with the opportunities, Smith will hand him, he’ll more than likely take them too having earned the chance of making it in the Premier League. With four-five impressive wins from seven so far, Cash, Martínez and Konsa have all been a major part of Villa’s early season form.

Manchester City have the destiny of the Premier League title in their hands heading into Sunday's final day showdown, with the defending champions holding a slender one-point lead over...

Aston Villa could have a big say on where the Premier League title ends up this season as they prepare to take on Manchester City on the final day of the campaign. If the Villans can stop Pep...